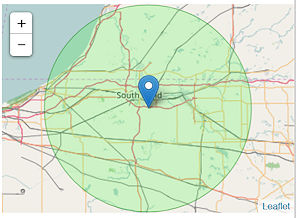 Originally, ITFS stations were licensed to transmit video signals only from a single transmission site (typically a tower or building rooftop) to specific receive locations.  New stations were permitted to be licensed on the same channels or adjacent channels so long as they did not cause interference to the reception of an ITFS signal at any other existing station’s receive sites.

Under the EBS rules adopted in 2005, legacy EBS stations (those licensed prior to October 25, 2019) were transitioned to geographic area licenses, with each station having a Geographic Service Area (GSA), defined as a circle with a radius of 35 miles from the license’s reference point (which typically was the old video transmission site).  A geographic area license authorizes the operation of one or more transmitters at any location within the GSA, and a licensee is generally free to add new transmitters, relocate or remove transmitters, or change technical operating parameters of transmitters without FCC approval, so long as the transmitters comply with certain technical requirements intended to protect nearby EBS stations from interference.

Because many ITFS stations were originally licensed at transmitter sites that are less than 70 miles from other ITFS stations operating on the same channels, many if not most of the 35 mile radius GSA circles established in 2005 would have resulted in overlapping GSAs.  To avoid that problem, the FCC created exclusive GSAs by splitting the overlap areas between or among the overlapping co-channel stations by a process often referred to as “splitting the football.”

Copyright © 2023 by NEBSA. All Rights Reserved.